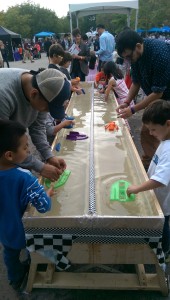 The Moat Boat Paddle Battle at World Maker Faire New York was a rousing success!  Ocean State Maker Mill was proud to host two days of “open moat” paddleboating fun for everyone, along with head-to-head races on Sunday for registered racers.

Most boats were the standard paddleboat style with the paddle in the center of the boat, but we did see some exciting new designs – we’ll be posting an image gallery shortly of all the boats, candids and fun!  We’re also working on a video… stay tuned!

Of course, the camaraderie and prizes are the best parts of the competition – and do we have a story to tell!  Little did we know, we had a family of paddleboat racers in our midst – with two brothers competing in the Youth Races, and dad competing in the Open Races.  One brother won the Youth Races… and dad finished out the Open Races for the day with a win for himself!

Winners of the two races take home a brand new 3D printer, generously donated by Moat Boat Paddle Battle sponsors SeeMeCNC.  With a printer win already in the books earlier in the day, our paddleboat racing family decided to forego their second printer win of the day, and pass it along instead to the runner up in the Open Class.  Here’s our winner’s circle, with the awesome Steve from SeeMeCNC! 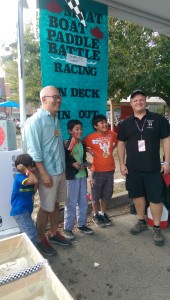 Excellent times had by all for the 2nd running of the Moat Boat Paddle Battle.  Current plans are in the works for our next Maker Faire races, so stay tuned!

Ocean State Maker Mill would like to thank, as always, our rockin’ sponsors SeeMeCNC, as well as all the folks behind Maker Faire and Make:!